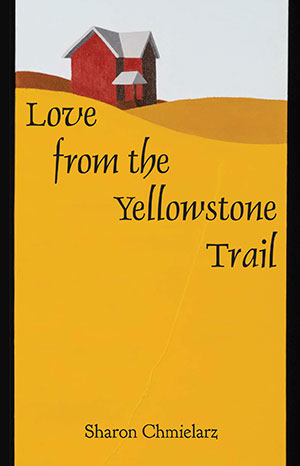 Love from the Yellowstone Trail

Love from the Yellowstone Trail has three parts: poems about the Missouri River and water; some history of whites and Native Americans along the Trail, especially in South Dakota; and an inside view of life in the houses along the Trail. In the poem, “First a River, the Missouri,” she writes, “I’ve seen the river’s plain table and its gifts/ from the dead daughter, shells, birds,/ the white tail which makes its way/ through blonde grasses to drink at the shore.”

Sharon writes, “I spent my first eighteen years within sight of the Missouri River seen from our front porch steps. Thus rose six poems about the river. The Yellowstone Trail is an old name for stretches of the current Highway 12 (or 394 if you live in the Twin Cities). Thus rose the book’s title and a way in and out of the book’s sections, just as the Trail was a way in and out of my hometown in South Dakota. As was the railroad—the Chicago, Milwaukee, St. Paul and Pacific—which makes appearances in several poems. On the Missouri’s west side lies the Standing Rock Reservation. You drive across the “Singing Bridge” and when your wheels hit land again you’re on the rez and in Mountain Standard time. That was always fun for me as a child (and adult): gaining or losing an hour within a couple of minutes. Thus rose nine poems about the Hunkpapa and other Lakota/Dakota who live on Standing Rock and in my hometown. The book’s last section is about houses, anyone’s houses, and the life inside them.”

Listen and read: “The River’s Arguments“