Sharon Chmielarz was born and raised in Mobridge, South Dakota, three miles from the Missouri River. Sharon is honored to be selected as the South Dakota Poet of Merit for 2021 by the South Dakota State Poetry Society. She graduated from the University of MN and has since lived and worked in the Twin Cities. Her latest, thirteenth, book of poetry is Speaking in Riddles, 2021. Previous books have been finalists for the Independent Book Publishers Award, Midwest Book Awards, National Poetry Series, and the Next Generation Indie Book Awards. Kirkus Review named her The Widow’s House one of the 100 Best Books of 2016. The Other Mozart, a biography of Nannerl Mozart in poetry, was made into an opera. She is a recipient of Water~Stone Review’s Jane Kenyon Prize. Her work has been published most recently in magazines like The Hudson Review, Burning Word, The American Journal of Poetry. Her poems have been nominated several times for a Pushcart Prize (latest, 2017, 2018, 2019), and featured on American Life in Poetry. Individual poems have been translated into French and Polish. The latter will be included in an anthology in Polish in 2019. Her poems’ subjects include women, history, family, and the prairie. She’s read in several venues in the Twin Cities, in Duluth and Grand Marais, New York City, Toronto, Tucson, the Dakotas, Wisconsin, Rhode Island, California, and North Carolina.

I was born in Mobridge, South Dakota, and raised at 306 6th Avenue West, a block and a half south of Highway 12. “12” led in and out of town, east to my future, west to my past. When I was ten, I didn’t know that. 6th Avenue, the boulevard of four elms, was one of my stomping grounds—the Cains’ yard—Alvie’s fish pond, Cassie’s grape arbor aka sedan chair, lovers’ bower or train; Manuel’s house, a new kid who was handsome and liked horses and moved away with his family all too soon; the Powell’s two-story rickety house with a great barn to play in though you had to watch out for lice.

In August our garden’s just-picked tomatoes sold like hot-cakes in the trailer court on the east side of 6th Avenue. Knock on the trailer door, show your wares. How much? Six for two bits. An easy sell. My mother, a canner, was glad to get rid of the surplus.

The court was run by Mrs. Landler who allegedly sold liquor under the counter to the Lakota. Illegal. But on Mondays if there were any Sunday Aberdeen papers left she might give one away; inside the bundle a rich lode of comic strips, the “funnies,” waited to be read.

Drive four hundred miles east on Highway 12, you wind up in Minneapolis. A straight shot by train, too, the Chicago, Milwaukee, St. Paul and Pacific. In the city Highway 12 was called Washington Avenue. The railroad station was also on Washington. Board the train at midnight in Mobridge and arrive around six in the morning. Cross Washington Ave. to catch the bus, and in no time you’d arrived at the University of Minnesota’s Comstock Hall.

That was the route I took to get where I am, thirteen books of poetry and many years of teaching later. You can read about my books’ contents in this website’s “Books” section. 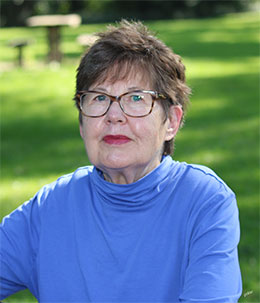